CBDMH Blog
You are here: Home / CBDMH Blog / Challenges of Interdisciplinary Research / LA Film Screening (March 26, 2013): “Standing on the Edge of a Thorn”... 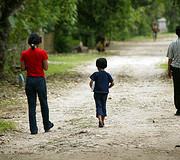 Film Screening
“Standing on the Edge of a Thorn” is a short film about the family and community origins of prostitution and sex trafficking in rural Indonesia. Shot over 12 years, it‘s an intimate portrait of a family that descends into the sex trade, amidst poverty and mental illness. “Thorn” shines a light on the conflicts and conditions that propel women to sell their bodies (and the bodies of their children) for monetary gain.  (32 min / Documentary short / English subtitles)

The panelists will discuss filmmaking from both an anthropological and documentary prospective. What are the challenges of bringing a controversial topic to the screen? Of finding subjects willing to open up to the camera? Of working as a male director on women’s issues? The speakers will also address the difficulties of filming in a developing nation and the indispensable role of local contacts and crew. Robert Lemelson will tap his decade of ethnographic filmmaking in Indonesia, while Ima Matul will speak to her work at CAST LA as an advocate for victims of sex trafficking.

Molecular Psychiatry – Abstract of article: A neurogenetics approach to... Haunted by trauma, tsunami survivors in Japan turn to exorcists (Reuters)
Scroll to top