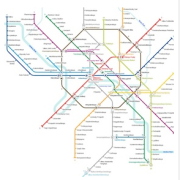 This is just a brief note that Dialogues in Clinical Neuroscience 2013; 15(3) focuses on Static and Dynamic Imaging: Clinical and Therapeutic Implications. The issue includes an overview by Olaf Sporns, author of Networks of the Brain (MIT, 2010) and Discovering the Human Connectome (MIT, 2012).

In particular, three papers might be of particular interest to this community on  (1) schizophrenia and effective connectivity (Birnbaum, Weinberger); (2) schizophrenia and and abnormal brain network hubs (Rubinov, Bullmore), and (3) the default mode network and psychosis (Buckner). Abstracts for the three papers and links are pasted below. NB: Olaf Sporns was recently interviewed in Brain Science Podcast re the connectome (link to audio file).

Functional neuroimaging and schizophrenia: A view towards effective connectivity modeling and polygenic risk

We review critical trends in imaging genetics as applied to schizophrenia research, and then discuss some future directions of the field. A plethora of imaging genetics studies have investigated the impact of genetic variation on brain function, since the paradigm of a neuroimaging intermediate phenotype for schizophrenia first emerged. It was initially posited that the effects of schizophrenia susceptibility genes would be more penetrant at the level of biologically based neuroimaging intermediate phenotypes than at the level of a complex and phenotypically heterogeneous psychiatric syndrome. The results of many studies support this assumption, most of which show single genetic variants to be associated with changes in activity of localized brain regions, as determined by select cognitive controlled tasks. From these basic studies, functional neuroimaging analysis of intermediate phenotypes has progressed to more complex and realistic models of brain dysfunction, incorporating models of functional and effective connectivity, including the modalities of psycho-physiological interaction, dynamic causal modeling, and graph theory metrics. The genetic association approaches applied to imaging genetics have also progressed to more sophisticated multivariate effects, including incorporation of two-way and three-way epistatic interactions, and most recently polygenic risk models. Imaging genetics is a unique and powerful strategy for understanding the neural mechanisms of genetic risk for complex CNS disorders at the human brain level.

Schizophrenia is a heterogeneous psychiatric disorder of unknown cause or characteristic pathology. Clinical neuroscientists increasingly postulate that schizophrenia is a disorder of brain network organization. In this article we discuss the conceptual framework of this dysconnection hypothesis, describe the predominant methodological paradigm for testing this hypothesis, and review recent evidence for disruption of central/hub brain regions, as a promising example of this hypothesis. We summarize studies of brain hubs in large-scale structural and functional brain networks and find strong evidence for network abnormalities of prefrontal hubs, and moderate evidence for network abnormalities of limbic, temporal, and parietal hubs. Future studies are needed to differentiate network dysfunction from previously observed gray- and white-matter abnormalities of these hubs, and to link endogenous network dysfunction phenotypes with perceptual, behavioral, and cognitive clinical phenotypes of schizophrenia.

The brain’s default network: Origins and implications for the study of psychosis

The brain’s default network is a set of regions that is spontaneously active during passive moments. The network is also active during directed tasks that require participants to remember past events or imagine upcoming events. One hypothesis is that the network facilitates construction of mental models (simulations) that can be used adaptively in many contexts. Extensive research has considered whether disruption of the default network may contribute to disease. While an intriguing possibility, a specific challenge to this notion is the fact that it is difficult to accurately measure the default network in patients where confounds of head motion and compliance are prominent. Nonetheless, some intriguing recent findings suggest that dysfunctional interactions between front-oparietal control systems and the default network contribute to psychosis. Psychosis may be a network disturbance that manifests as disordered thought, partly because it disrupts the fragile balance between the default network and competing brain systems.